What are the historical roots of Hip Hop?

Hip Hop emerged directly out of the living conditions in America’s inner cities in the 1970s, particularly the South Bronx region of New York City. As a largely white, middle-class population left urban areas for the suburbs in the 1950s and 1960s—a phenomenon known as “white flight”—the demographics of communities such as the Bronx shifted rapidly. The Bronx, one of New York City’s five “boroughs,” became populated mainly by Blacks and Hispanics, including large immigrant populations from Caribbean nations including Puerto Rico, the Dominican Republic, Jamaica, Barbados, Trinidad and Tobago, and others.

Simultaneous with the “white flight,” social and economic disruptions abounded. Construction on the Cross Bronx Expressway, which began in the postwar period and continued into the early 1970s, decimated several of the minority neighborhoods in its path; city infrastructure was allowed to crumble in the wake of budget cuts, hitting the less privileged parts of the city most directly; and strikes organized by disaffected blue-collar workers crippled the entire metropolitan area.

Amidst the higher crime and rising poverty rates that came with urban decay, young people in the South Bronx made use of limited resources to create cultural expressions that encompassed not only music, but also dance, visual art, and fashion. In music, Latin and Caribbean traditions met and mingled with the sounds of sixties and seventies Soul, Disco, and Funk. The venues for the emerging art of Hip Hop were public parks and community recreation centers, sheets of cardboard laid out on city sidewalks became dance floors, and brick walls were transformed into artists’ canvases. Turntables became laboratories for musical experimentation as old sounds were remixed in new ways. The spirit of invention was particularly vibrant against a backdrop of empty lots, boarded-up windows, and burned-out buildings.

In a borough where poverty and an eroded infrastructure meant very limited access to instruments  and music education, young music makers created with what they could find. DJs assembled their own sound systems and built extensive record collections by searching secondhand stores for old Soul, Funk, and Rock and Roll albums; they used their collections to provide entertainment within their communities. Sounds taken from these records—from James Brown’s drum breaks to Parliament Funkadelic’s funky bass lines—provided the raw materials for creative work: beats to be mixed and modified. On top of that, MCs (short for Master of Ceremonies) rapped.

While early Hip Hop was often dance music, the genre also picked up where certain 70’s Soul left off, serving as a vehicle for social commentary. Stylistically, MCs drew on a number of influences, including Jamaican “toasting,” a style of lyrical chanting over a beat that was brought to New York by the burgeoning Caribbean immigrant community.  The role of the MC expanded over time while the raps themselves blended influences from a variety of marginalized populations, reflecting the circumstances of an evolving urban America.

In this lesson, students will examine raw documentary footage, demographic charts, television news stories, and song lyrics to connect the sounds of early Hip Hop to the substandard living conditions in American inner cities in the late 1970s, particularly the Bronx in New York City.  Students will compose their own verses to Grandmaster Flash’s “The Message,” to be followed up with a research-driven writing assignment to further explore the urban environment depicted in the landmark song.

Show ABC News clip of the South Bronx in 1982 (video does not contain audio). Discuss as a class:

1.  Explain to students that the place shown in the clip is an area of New York City known as the Bronx, a place considered to be the birthplace of Hip Hop. Distribute Handout 1: Map of New York City. Ask students: 2.  Guide students to the point on the map marked “1520 Sedgwick Avenue” and display image of the building. Explain that this is the address of an apartment building in the Bronx where some of the earliest Hip Hop performances occurred, including several house parties emceed by DJ Kool Herc, a resident of the building.

Display photo of the Cross Bronx Expressway. Explain that the expressway was constructed between 1948 and 1972, and was one of the first highways to be built directly through a crowded urban environment. While technologically innovative, its construction deeply affected the communities through which it passed by dividing neighborhoods, lowering property values, and hastening the rate of urban decay in many sections of the Bronx. 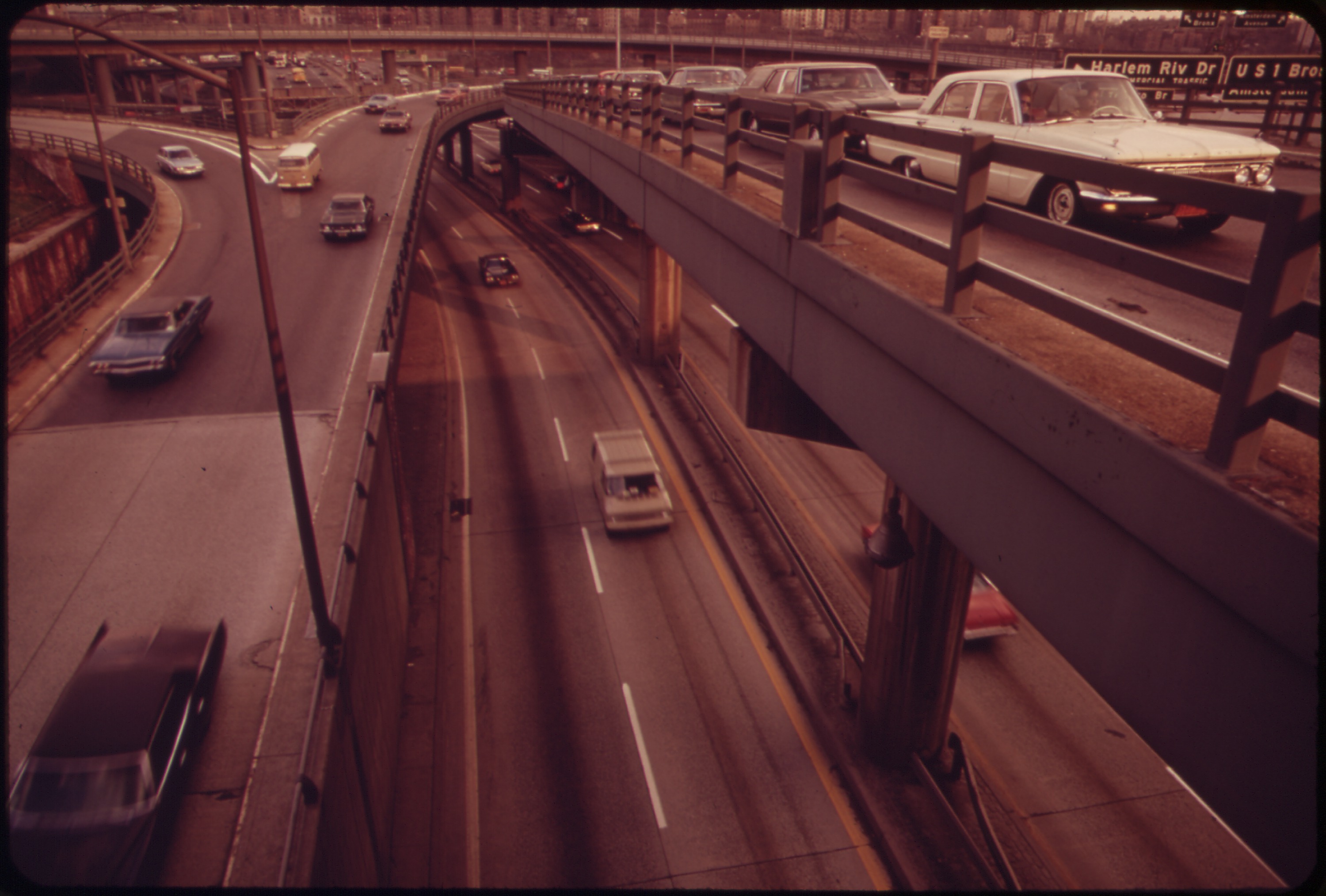 3.  Direct students back to the map. Ask students:

4.  Distribute Handout 2: Bronx Demographics 1960-2000. Ask the students to answer the following questions about the socioeconomic conditions in the Bronx based on the information in the two charts: 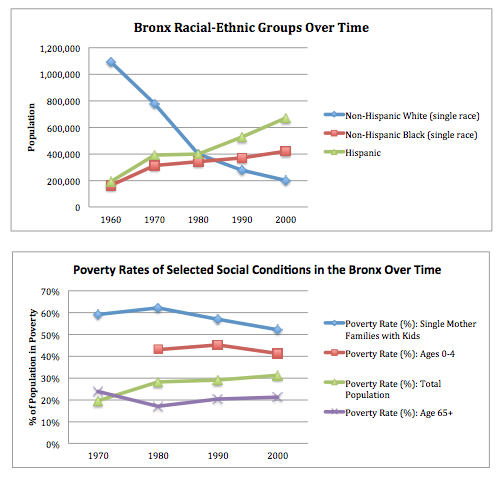 5.  Show a video clip from an interview with Hip Hop pioneer Grandmaster Flash. Explain that this news story was produced in 2000, but examines events that occurred in the late 1970s. Discuss as a class:

7.  Show video excerpt of the song “The Message” by Grandmaster Flash and the Furious Five, recorded in 1982. Inform students that they will work in their groups to analyze the way the song reflects the social conditions of New York City in the 1960s and 1970s. Students should underline specific lines in the song and connect them to specific events from the timeline.

[Note to teacher: The video and song lyrics of “The Message” contain some explicit language. The teacher is advised to assess whether or not these materials are appropriate for their students. Also note that the video clip ends before the third verse, but students should be able to complete the assignment using the lyrics on the handout.]

10.  Reconvene the class and discuss:

[Teacher can emphasize the idea that early Hip Hop required few resources: a turntable or two, speakers, existing records, and a DJ with a lot of imagination; students can compare this to the instruments, equipment, and resources needed to form a rock band.]

Ask students to select one or more events from the timeline not already evoked in the song and write an additional verse for “The Message” to reflect those events and their moment.

Students will select an event from the New York City timeline and conduct further research into it, producing an argumentative essay to demonstrate an historical understanding of that event and how it affected New York City in the 1960s and 1970s. Students should include a clear thesis statement declaring the importance of that event in comparison with other events on the timeline, followed by research-based evidence to support the thesis. Be sure to also explain why the event was important enough to warrant a lyrical mention by Grandmaster Flash in “The Message.”

Show video of Grandmaster Flash on ABC’s Nightline in 2012. Discuss as a class: