What role did cover songs like “Twist and Shout” play early in the Beatles's career, and how did their experiences growing up in post-WWII Liverpool and performing in Hamburg nightclubs help them to develop as a professional musical ensemble?

In late-1950s Liverpool, a teenage John Lennon teamed up with Paul McCartney to form the Quarrymen, a group that by 1960 would become the Beatles. As teenagers, Lennon and McCartney were initially drawn to Skiffle music. Skiffle, which developed in Britain after World War II, was a kind of street music that relied on homemade or inexpensive instruments—often a washtub bass, a washboard, a banjo and an acoustic guitar—and combos generally played covers of Folk and Blues-style songs. Similar in ways to Punk and Hip Hop, Skiffle players were not always reliant on traditional venues, expensive equipment or in-depth knowledge of an instrument. Because of this, young musicians without much money or experience, including Lennon and McCartney, found the genre accessible. It was their door in.

By 1960, Lennon and McCartney had transformed their band into a more professional operation. Now calling themselves the Beatles, their ensemble included lead guitarist George Harrison and drummer Pete Best, who would later be replaced by Ringo Starr. The group had incorporated more Rock and Roll and Rhythm and Blues covers into their repertoire and were soon performing gigs in dancehalls and nightclubs. Between 1960 and 1962, the Beatles were hired to play several residencies at nightclubs in Hamburg, Germany, including the Kaiserkeller and the Indra Club. During this period, the group typically played multiple sets over four and half to six hours a night. Their shows leaned heavily on the repertoire of early American Rock and Roll artists, including material by Little Richard, Chuck Berry, and Buddy Holly. In the process of playing so many shows and learning so many songs, the Beatles sharpened their skills as entertainers, as instrumentalists, and ultimately, as songwriters. 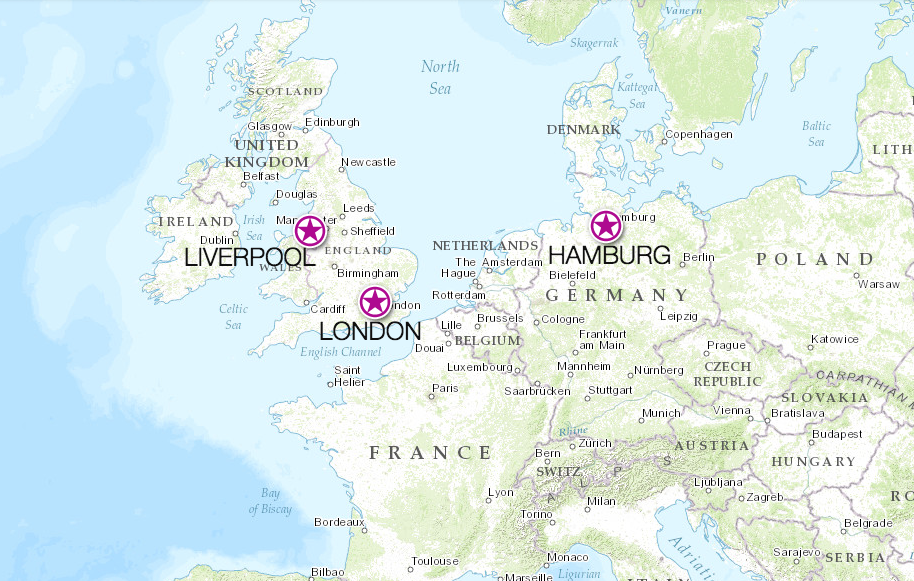 The Beatles grew up in Liverpool, England in the late 1940s and 50s, the years following World War II. Unlike the United States, which did not directly experience combat on American soil, Great Britain struggled for many years to return to normalcy following the devastation caused by the war. Though the war had ended in 1945, rations on food and other material goods continued into the 1950s, and port cities, including Liverpool, had to rebuild much of their bombed-out infrastructure. Compared to the booming postwar years in the United States, life in Liverpool was bleak. Set against this backdrop, it was no wonder that the bright sounds of American R&B and Rock and Roll music proved attractive to teenagers like John Lennon and Paul McCartney. This new music came from a far-off country they had never visited, a place about which they had a vivid fantasy life based on images described in Chuck Berry and Little Richard songs. American Rock and Roll and R&B deeply affected the Beatles as they began to find their own musical style as a cover band.

After several years of developing their act in Liverpool and Hamburg, the Beatles signed to EMI in 1962. The group traveled to London to record their debut album, Please Please Me. The album showcased a band in transition, containing eight original songs including “I Saw Her Standing There” and “Love Me Do,” in addition to six cover songs including “Twist and Shout.” The collection portrayed the Beatles with one foot still in the world of the cover band and the other foot planted in their future as recording artists and original songwriters. Of the band’s first five albums, four included a mix of both Beatles originals and cover songs. But after 1965, the band recorded seven more studio albums, with only one cover song appearing on the cumulative track list. During this later stage in their career, the Beatles committed to crafting original songs and exploring new frontiers of recording popular music in the studio.

The Beatles’s fascination with American music culture can best be understood when considered in the context of teenage life in postwar Europe. The world in which Lennon, McCartney, Harrison, and Starr grew up was deeply scarred by war. Liverpool, an important shipping center in England, had been largely bombed out by the Germans, requiring years of rebuilding. Food rationing, which had once been a wartime necessity, continued for nine years after the war as the British economy recovered. American records, including the Isley Brothers’ 1962 hit “Twist and Shout,” provided the members of the Beatles with an escape from this everyday reality. By performing this song and others like it in their setlist, the Beatles were able to immerse themselves, and their European audiences, in an American sound driven by a youthful energy that symbolized another world of possibility.

Family in front of their home in Levittown, PA, 1950

Album cover and track listing for the Beatles debut album Please Please Me, 1963

1. Display an image from 1942 of Liverpool after a German bomb attack during World War II. Mention that Liverpool is where the future members of the Beatles grew up. It is also an important port city in Northern England which made it a target during the war. For contrast, display an image of a suburban family in postwar America. Study both photos as a class, then ask students: 2. Play a clip of musician Gerry Marsden discussing how American records arrived in Europe, followed by one of musician discussing the emergence of Skiffle music in postwar England. Ask students:

3. Play the audio clip of “recorded in 1962 by the American group the Isley Brothers. Explain that the Beatles performed this song during their early period as a professional “cover band,” the term for a band that plays songs written and first recorded by other performers. Ask students:

4. Present the class with the following scenario: Imagine that you are a member of the Beatles in the early 1960s, when the band was beginning to play professional gigs. You’ve just heard “Twist and Shout” for the first time. At band practice that night, how would you describe the song to the rest of the group? How would you make your case to convince your band to cover it at your next show?

5. Explain that between 1960 and 1962, the Beatles played a series of residencies in Hamburg, Germany, where they were hired to perform in nightclubs, playing multiple sets over four-and-a-half to six hours a night, six or seven night a week. Distribute the Beatles Discuss Hamburg Worksheet that includes a series of quotes about the Beatles in Hamburg and have a volunteer read the introduction aloud to the class.

6. Divide students into small groups of three or four. Direct groups to take turns reading the Beatles quotes aloud, underlining any words and phrases that describe how the band improved as a musical ensemble during their time in Hamburg. After reading through the quotes, groups should discuss the questions and fill in the answers on the second page of the worksheet. Once everyone has finished, invite groups to share out something the Beatles learned about being professional musicians from their time in Hamburg.

7. Play the video clip of the Beatles performing “Twist and Shout” live in 1963. Ask the students:

8. Display an image of the album cover and list of songs the Beatles recorded for Please Please Me, their debut album from 1963. Ask the students to identify and count the cover songs on the album, material not credited to John Lennon and Paul McCartney. Discuss as a class: What does the inclusion of six cover songs (all by American artists) on this record suggest about the Beatles’s relationship to American music culture and American life?

9. Play a video interview with musician Steven Van Zandt discussing the early career of the Beatles and how playing covers can help shape the identity of a band. Discuss as a class:

10. Ask students: as a music class using the Little Kids Rock methods, why do you think we spend time learning to play cover songs? What connections can we make between what we are doing as a class and what the Beatles did in their early days as a band? [Note: Teacher may opt to have students write a short paragraph reflecting on these questions in place of, or in addition to, discussing as a class.]